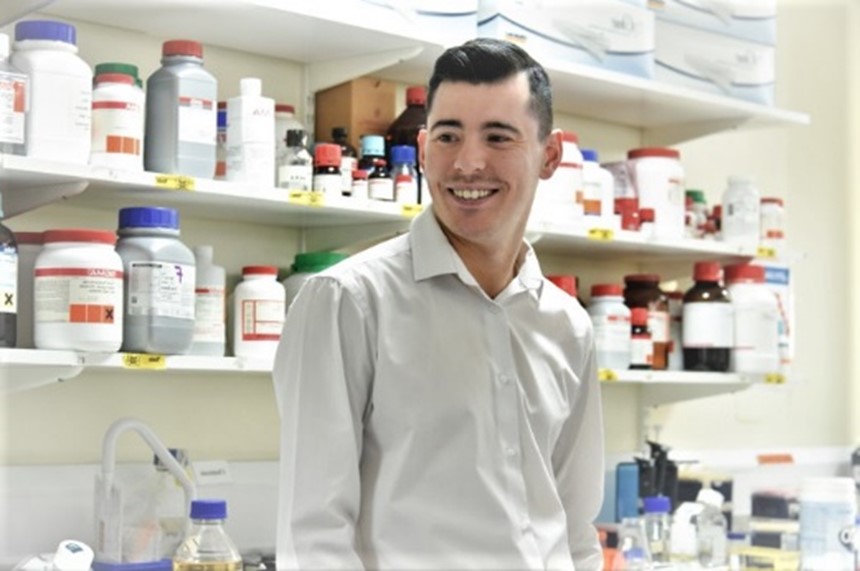 Osteosarcoma (OS) is a complex cancerA disease where cells divide and grow uncontrollably and can spread to other areas of the body. with many questions that remain unanswered. The more we understand about how OS behaves, the better we will be able to plan treatment strategies. OS is currently treated using a combination of chemotherapy and surgery. MetastasisCancer cells have spread from the site where they developed to other parts of the body. of OS can make treatment more challenging, as different parts of the body need treatment. Predicting whether cancer will spread could impact the type of treatment a person receives. Last year, a paper was published identifying a role for a proteinFound in cells and needed for the development, growth and function of our bodies. called P2RX7B in promoting growth and spread of OS.

P2RX7B acts on the surface of cells and is activated by ATP (adenosine triphosphate). ATP has been found in high concentrations in the tumourA mass of cells that are growing where they shouldn’t be. Tumours can be benign or malignant. Benign tumours do not spread to other parts of the body whereas malignant tumours are cancerous and have the potential to spread. microenvironment whereas it cannot normally be detected in healthy tissueAn organised group of cells that act together to perform a function.. It has been shown that the adenosine part of ATP can also suppress the immune systemA system in the body that fights infection.. This means that if it is present in high levels, it creates an environment that can favour cancer progression. P2RX7B has been shown to be upregulated in many different cancers. In a type of lung cancer, it has been shown to be associated with reduced immune cell activity. In the blood cancer acute myeloid leukaemia, P2RX7B was increased in people whose cancer had returned. In the same study, combining chemotherapy with a P2RX7B antagonist (a drug that can block the action of P2RX7B) could reduce the growth of the tumour.

For cancer to spread, the cancer cells need to be able to grow faster and be able to move. The authors showed that the cells that expressed P2RX7B showed an increased growth rate. This was slowed by using a P2RX7B antagonist. For cells to be able to move, they first need to lose their adhesion properties (how well they stick to their surroundings). They then need to be able to migrate (move). The researchers tested both these properties and showed that cells expressing P2RX7B were less adhesive and migrated faster than cells that didn’t express P2RX7B.

Next, the authors of the study looked at the effect of P2RX7B in a mouse model of OS. They injected the OS cells grown in the lab which either did or did not express P2RX7B. These then formed tumours.  Surprisingly, they found no difference in the overall size of the tumours formed in the presence or absence of P2RX7B. The authors also looked at whether there was any extra bone growth, as this can occur in OS. In this model, there was an increase in the total bone volume in both tumours that expressed P2RX7B and those that didn’t. The bone volume was reduced when treated with the P2RX7B antagonist. However, this also occurred in the tumours that didn’t express P2RX7B. The authors suggest that the effect of this drug may not be directly driven by the tumour but rather the tumour microenvironment, where other cells may express P2RX7B.

Does P2RX7B increase spread to the lungs?

A common site for OS to spread to is the lungs. Using the mouse model described above, the researchers took samples to check for spread to the lungs. The authors did not see spread to the lungs from OS that did not express P2RX7B. However, they did see evidence of spread to the lungs in some of the samples from P2RX7B-expressing OS. Although spread occurred less often in mice treated with the P2RX7B antagonist, this was not statistically significant (it could not be ruled out that the results are due to chance).

This study demonstrates the role P2RX7B plays in OS. Future work looking at how and if P2RX7B can be targeted to treat OS still needs to be done. We spoke to Luke Tattersall, the lead author of the paper, to find out what the next steps of his work are following this study.

“Our Research provides information about the receptor P2RX7B and its effect in osteosarcoma growth and metastasis. Drugs have already been developed to target this protein and have been found safe for use in patients. Since the publication of this research in 2021 we have further published an updated review of the role of P2 Receptors (which P2RX7B belongs to) in bone cancer.

As of 2022 both myself and Prof Gartland are part of a European wide Cost Action Group working to accelerate P2XR targeting therapies towards clinical application for patient benefit”.

This ongoing research demonstrates that drugs that target P2RX7B or similar proteins could be a potential treatment for OS in the future.

We look forward to hearing future research updates from Luke and his work on P2XR7B.