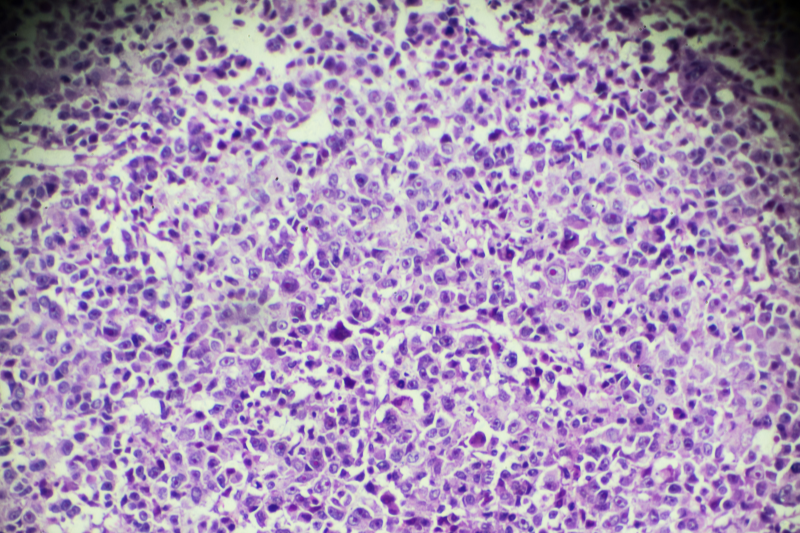 There is an urgent need to find new treatments for osteosarcoma (OS) with less harmful side effects. To do this we need to find drugs that specifically target OS and not the other cells in the body. A recent study led by Professor Richard Gorlick (MD Anderson, USA) found several new proteins on the surface of OS cells that are potential targets for drugs.

The research team started by looking for proteins in OS cell lines (human OS cells that are grown in a laboratory) and OS patient-derived xenografts (mouse models which have human OS cells in them). Data was also collected from a public proteinFound in cells and needed for the development, growth and function of our bodies. database.

64 cell surface proteins were identified as potential drug target candidates.  These proteins were of interest as they were more common on the surface of OS cells than on non-OS cells.

To narrow down the search and ensure the best proteins were chosen for further study, the researchers zoomed in even further. They looked at what proteins were being made specifically in the OS cells. DNAThe molecule that contains the genetic information that makes you the person you are. is a unique genetic code that tells the machinery in our cells what proteins to make, through an intermediate molecule called RNA. The amount of RNA in cells can be measured which illustrates how much of a protein is being made in a cell.

Through measuring RNA, the researchers found 209 surface proteins that were being made in OS cells more than in non-OS cells. This was compared with the 64 proteins that had already been found. 11 proteins were found to be in both groups.

Next, the researchers looked for drugs that targeted these 11 proteins. 4 of the proteins, MT1-MMP, MRC2, CD276, and LRRC15, had drugs which targeted them. LRRC15 had already been shown in a laboratory setting to be a potential drug target for OS. This gave the researchers confidence that their approach to finding OS proteins was effective. Therefore, the team focused on the other 3 proteins.

Further experiments showed that all 3 proteins were abundant in OS cells but less so in healthy cells. This made them appealing drug targets because having a limited effect on healthy cells reduces the chance of side effects.

The research team then assessed whether a drug called BT1769 had any anti-cancer activity. BT1769 is a drug that binds to cells expressing MT1-MMP and then releases toxic drugs to kill them. They tested the drug in patient-derived xenografts and found that it showed some promising anti-cancer effects. BT1769 is currently being tested in clinical trials in patients with multiple different cancerA disease where cells divide and grow uncontrollably and can spread to other areas of the body. and the side effects have been well tolerated. This makes it a potential candidate for testing in OS in the future.

Altogether this study has shown that there are several possible proteins that can be targeted to treat OS. Although promising, these results highlight the need for further research both into the development of drugs and their testing in clinical trials.

Find out more about the drug development process.