Overcoming the Challenges of CAR T Therapy in Osteosarcoma 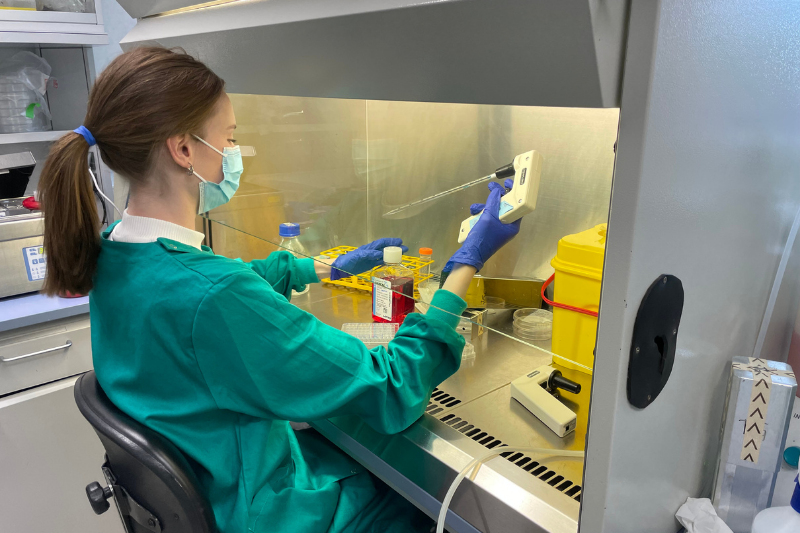 My name is Patricia García Rodríguez. I am a Junior Researcher at the Instituto de Salud Carlos III (Spain). I am part of the Cellular Biotechnology group, supervised by Dr. Javier García-Castro. I’m deeply motivated to develop new treatment options for cancerA disease where cells divide and grow uncontrollably and can spread to other areas of the body.. My research focuses on optimizing new therapies to treat osteosarcoma (OS).

Research into new options for treating cancers with poor outcomes is essential. CAR T therapy, a type of cancer treatment, has had excellent results in blood cancers but has not yet worked in solid cancer types including OS. Why is it trickier to use this new therapy in OS? In this blog, I will discuss the challenges in using CAR T therapy, as well as approaches to overcoming them.

Instructing our immune systemA system in the body that fights infection. to fight cancer

Our immune system protects us from diseases. It has many resources to attack anything unknown, including cancer. T cells are vital players in the immune system and their job is to find faulty or infected cells. Given this responsibility, when they discover an unusual cell, they quickly destroy it. This limits damage to healthy cells in the body. Cancer can block this system allowing them to grow freely.

While it may sound like science fiction, it is possible to give our body’s immune system “superpowers” so that they can detect markers on cancer cells and kill tumours more effectively. The process to give them this potential is complex. First, T cells are isolated from the body in a process similar to blood donation. Then, in the laboratory, artificial receptors are added, which recognize cancer cells. These receptors are called CARs or Chimeric AntigenA marker on the surface of a cell that is recognised as ‘foreign’ by the immune system. Receptors. Depending on which markers the CAR recognises, the treatment will target different tumourA mass of cells that are growing where they shouldn’t be. Tumours can be benign or malignant. Benign tumours do not spread to other parts of the body whereas malignant tumours are cancerous and have the potential to spread. types. When returned to the body these new receptors give the T cells the power to target and kill cancer cells.

“I think developing new therapies can change the current prognosis for cancer patients.  Being part of a group and research with a vision that focuses on transferring advances to the clinic is an exceptional opportunity to grow and contribute to science. That’s why I do research, to provide solutions for patients.” – Patricia García Rodríguez

CAR T therapy does not yet have any clinically approved drugs in solid tumours. There are several reasons for this.

Firstly, one of the most important factors of CAR T therapy is the design. The artificial receptor must be specific to a target on a tumour. This means that the target should only be present on tumour cells and not in healthy cells ensuring that the CAR T attacks only tumour cells. Without a specific target, CAR T may also attack healthy cells, which results in side effects. It can be difficult to find a specific target in solid tumours. Scientists are already working on a solution to this. One of the ideas is to use two artificial receptors instead of just one. In this way, the CAR T cell will only activate when it encounters both targets. This makes it less likely that both targets will be in healthy cells, so it should only kill cancer cells and have fewer side effects.

CAR T therapy is injected into the patient’s bloodstream. Once in the blood, it should target the tumours and any areas of metastasisCancer cells have spread from the site where they developed to other parts of the body. (spreading cancer cells). The problem is that the treatment may not find the tumours. Previously in clinical trials, very few CAR T cells were found in the tumours, resulting in poor anti-tumour activity. To overcome this issue, CAR T cells could be injected directly into the tumour.

Normally CAR T treatment is generated in a laboratory from the patient’s cells. This causes a delay between when you want to treat and when you can, so a patient may no longer be eligible for treatment by the time the CAR T is ready. Also, a large number of CAR T cells are needed and the process to increase their number wears out the T cells making them less active and more “exhausted” when they are used for treatment. Using donor cells (cells from another matching person) could shorten production times. Their cells may also be less exhausted because the donor has not received previous treatments, so their immune cells are in a better state. There is a risk that a patient’s body will reject donor cells so laboratory techniques and genetic engineering methods, such as CRISPR-Cas9, could be used to improve the safety and effectiveness of donor CAR T cells.

Although it may not seem simple, research does not stop. Ours and many other research projects are already underway to overcome all of these barriers. Hopefully, in the future, these CAR T therapies will be used to treat OS.