Osteosarcoma Modelling gets an Upgrade with Stem Cells and Genetic Engineering 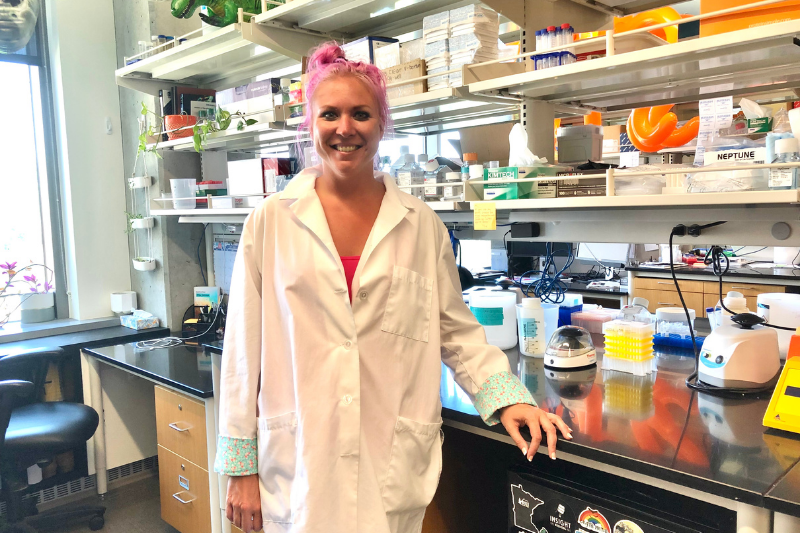 My name is Kelsie Becklin and I am entering my 6th year as a PhD candidate at the University of Minnesota (UMN). I work in the labs of Drs Branden Moriarity and Beau Webber where I am working towards my PhD in Comparative and Molecular Biosciences studying childhood sarcomas, including osteosarcoma (OS). My work will provide a better platform to test new therapies before they enter a clinic, making them safer and more reliable. Importantly, my work will also give insight to how OS starts, and I believe when we understand how OS starts, we can then understand how to break it back down and treat it.

We are overcoming these challenges by developing a new OS model where we control how OS starts and can watch the early progression of the disease. This will help us see what is driving OS and ultimately identify and test new therapies.

“Working on osteosarcoma is important to me because I have a 12-year old son and I think of how I would feel if he got this diagnosis and how I would want to know that someone was out there working as hard as they could to help him.  I want people to know that I am here fighting for their kids.  That I care.”

Just like a model train should be similar to a real train, the models we use for OS need to be similar to OS in a person. Our current OS models are much like going to a model train museum. You only see the final product. By looking at only the final product we are missing the changes that are responsible for the disease. To gain a much deeper understanding of how the train works you would need to have built it.

We are applying the concept of being the person who built the train to OS by developing a modelling system where we build OS from the bottom-up. To make this new model of OS, we are taking adult cells from people without any known risk for cancerA disease where cells divide and grow uncontrollably and can spread to other areas of the body. More and reverting their cells into specialized cells called stem cells. These stem cells can be converted to any other cell type found in the body with proper signals, including the cells OS starts from. In the stem cells, we can also change the DNAThe molecule that contains the genetic information that makes you the person you are. More from normal into what we think it’s like at different stages of OS development. Thus, much like our model train builder, we are able to see OS in its different developmental states and test them in the lab.

Once we have made our cells, we want to test them to see if they behave like OS in a dish and in animal models. What we see so far is that when we inject cells into the bones of the mice, the cells genetically similar to the cells in OS patients are able to form tumours. To make these OS-like cells we found that we have to remove important DNA-protecting proteins, such as TP53 or cell growth regulators like RB1. We also had to make more of other proteins such as the multifunctional proteinFound in cells and needed for the development, growth and function of our bodies. More c-myc which is known to help OS cells move around the body. These changes happen in OS patients and for the first time, we are able to watch it occur in a dish.

We now have a platform to study the changes in DNAThe molecule that contains the genetic information that makes you the person you are. More that are required for OS survival. Hopefully, this will lead to the identification and testing of new treatment options.