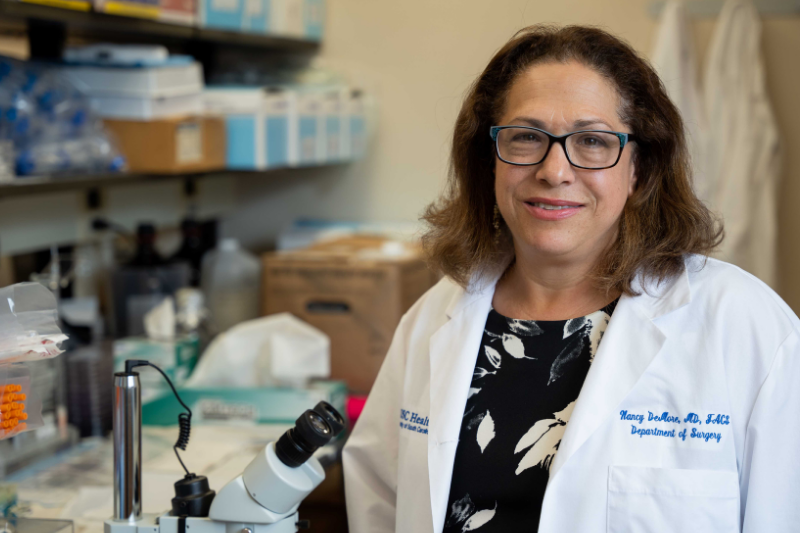 We are funding a project looking at a new drug for osteosarcoma. The drug has been developed by Professor Nancy DeMore (Medical University of South Carolina). It is a monoclonal antibodyPart of the immune system which recognises things that do not belong in the body and sticks to them including cancer cells. (mAB) against the proteinFound in cells and needed for the development, growth and function of our bodies. SFRP2. They hope this drug will improve outcomes for osteosarcoma patients.

Antibodies are part of the immune systemA system in the body that fights infection. and are found naturally in the body. They recognise proteins on the surface of foreign cells and bind to them. This binding activates the immune system and leads to cell death. mABs work in a similar way to naturally occurring antibodies however they have a more targeted approach. Antibodies are modified in the lab to target one specific protein. In this case, they target SFRP2, which is involved in cancerA disease where cells divide and grow uncontrollably and can spread to other areas of the body. growth.  The mAB will bind to cells expressing SFRP2 and destroy them.

SFRP2 is a protein involved in cancer growth. Research has suggested it may be involved in osteosarcoma spreading through the body. The DeMore lab has used the mAB in pre-clinical osteosarcoma models (non-human). The results showed that blocking SFRP2 stopped the growth and spread (metastasisCancer cells have spread from the site where they developed to other parts of the body.) of osteosarcoma.

Osteosarcoma is a complex cancer. There are currently no drugs that can treat it when used alone. It is thought combining different drugs may be a more effective way of treating osteosarcoma.  The aim of this project is to test the SFRP2 mAB in combination with other treatments.  The additive effect of two treatments may be more effective at treating metastatic osteosarcoma. The results of this study will help guide future clinical trials.

Watch our video to hear Nancy talking about the project.