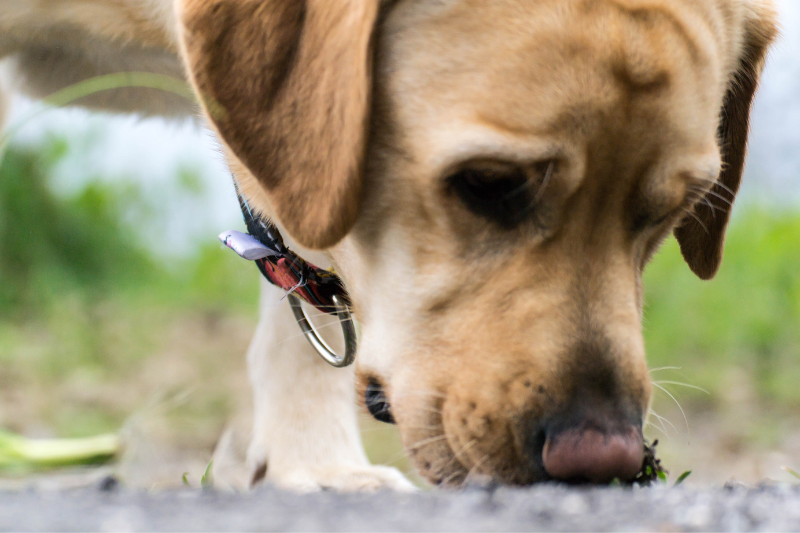 In recent years there has been a lot of research into new less invasive techniques to detect cancerA disease where cells divide and grow uncontrollably and can spread to other areas of the body. early. One of these techniques is training dogs to sniff out cancer.

People with cancer may produce specific smells that cannot be detected by the human nose. Dogs on the other hand may be able to detect the chemicals known as volatile organic compounds (VOC) that cause these smells.

Research has already shown that dogs can sniff out several cancers including lung and breast cancer. However, until now no research had been done looking at osteosarcoma (OS), the most common bone cancer.

“The remarkable ability of trained sniffer dogs to detect cancers though the volatile compounds they produce – essentially their smell – has been repeatedly demonstrated in controlled experiments.”

A recent study presented the first research looking at whether dogs can smell OS. Two dogs were trained over 16 months to recognise VOCs in OS patients. Firstly, the dogs were taught how to find and then react to a specific smell. Once they had perfected this with cedarwood oil (a non-human smell) the dogs were trained on an OS cell line (human OS cells that are grown in a laboratory). Both dogs successfully completed this part of the training.

Photo of one of the dogs detecting the target smell. The cells that produce the smell are in the black cylindrical bucket.

This image is a section of Figure 1 from ‘Proof of concept for the use of trained sniffer dogs to detect osteosarcoma’ by Ortal et al, published in Scientific Reports. Information on its use can be found here: https://creativecommons.org/licenses/by/4.0/

The next part of the study was to see if the dogs could detect VOCs from OS cell lines that they had not been trained with. The researchers conducted several different experiments where they hid a variety of OS cell lines in buckets alongside non-cancer cells. The dogs then had to find the OS cell line. The second dog was inconsistent in detecting the OS cells so it was decided he would not take any further part in the study. However, the first dog was able to successfully detect OS cells that he has not previously smelled almost every time.  He could then detect the OS cell lines in repeated experiments even when they were in different buckets.

A similar test was done with saliva collected from 2 OS patients. The dog was able to correctly identify the OS samples almost 100% of the time.

The results suggest that there is a common smell shared among different osteosarcoma patients. Dogs can detect this smell in cells grown in the lab, and importantly, in saliva samples (which are much easier to collect)

So, what does this mean for the future? Could dogs help us diagnose osteosarcoma?

We approached Dr Darren Logan, Head of Research for the Waltham Petcare Science Institute (United Kingdom) to hear his thoughts on how this research can be applied to clinical practice in the future. He described how training dogs to detect cancer is a very complex and costly. Therefore, he suggested rather than using dogs to detect cancer we can learn from them. ‘I think the real opportunity arising from this work is to use dogs’ superior sense of smell as a way of screening for the unique compounds produced by different cancers, against which more traditional diagnostic tests can then be designed.”

“I think the real opportunity arising from this work is to use dogs’ superior sense of smell as a way of screening for the unique compounds produced by different cancers, against which more traditional diagnostic tests can then be designed.”

In other words, in the future, we may be able to create tests that, just like a dog’s nose, can detect VOCs.

Altogether this study suggests that OS produces a common smell that dogs can be trained to recognise. Further research is needed with more dogs and OS samples. However, whether it is our canine friends that detect VOCs or technology that mimics them, this could be a valuable tool in the future to aid early diagnosis of OS.

The full study ‘Proof of concept for the use of trained sniffer dogs to detect osteosarcoma’ can be viewed here.